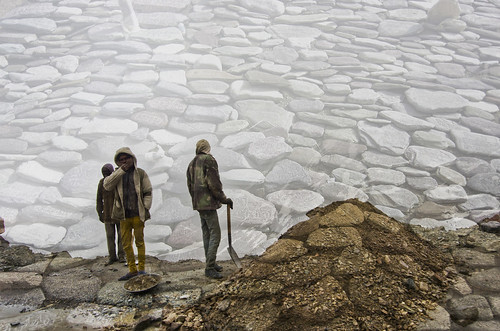 Travelling in India you can’t help but be struck by the social inequities. The caste system is alive and well. As ‘wealthy’ tourists we are served by many Indian workers, who cannot imagine the lifestyle options that we Westerners enjoy.

Major monuments, old Mughal palaces now open to tourists, are still maintained by an army of low-caste (and minimally paid) labourers, gardeners and construction workers – it resembles modern-day slavery. The roads of Kashmir and Ladakh traverse steep and barren terrain, and road crews camp alongside the roads and perform the necessary maintenance work, in all weathers. What are they thinking when I wave as I ride by?

Chris and I have recently returned from a three week trip through Kashmir and Ladakh in northern India. It’s taken some time to sort through the photos … here’s a taste …

Lamayuru, on the Srinigar-Leh road

Thanks to everyone who supported us at the exhibition opening, and especially to Sally King who said some very generous words to officially open the show. Some images of the exhibition and the opening are now online. Were you there? 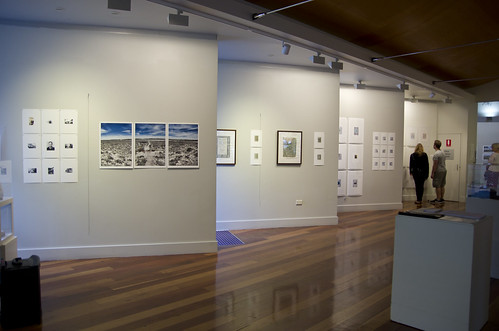 Recovering Roots … exhibition is opening on Saturday May 31, at Hazelhurst Community Gallery, with Christopher Lawrie. My great friend Sally King will be saying a few words in our defence 🙂 Hope to see you all there!  Following the opening it’s open every day until June 11, including the long weekend.

My contribution, The Timeless Land, combines pages of classic literature and historical texts with contemporary landscape photographs across several Australian states.
More information about the exhibition.
My images for The Timeless Land.

Michael and me in Richmond Park

I recently found out that an old friend from London died last month. Michael had just turned 60 and I hadn’t seen him for 30 years. He lived in Albuquerque for the last 20, and we exchanged Christmas letters for most of those years.

Michael was a friend of another friend, Mark, whom I met in the Greek islands and then spent time with when I was based for several months in London in late 1983. Mark, Michael and I were the greatest philosophers on earth, or so it seemed as we talked late into those London winter nights.

Lou Reed has been part of my cultural landscape since the early 70’s when he released the Bowie/Ronson-produced Transformer in 1972, and I then became aware of the Warhol-curated first Velvet Underground LP from 1967. I was 16, and aspired to art school, a rock lifestyle and all manner of bohemian excess. While the reality of my life turned out to be somewhat more prosaic than these fantasies, Lou was always there showing how to stay wild.

I first saw Lou Reed play in the Sally Can’t Dance tour of 1974, at the Festival Theatre in Adelaide. I loved the ‘glam’ of Transformer and was a little shocked by his blonde ‘junkie fag’ persona. I was 18, and wore a vintage wedding dress. The support act was AC/DC – then unknown outside of Sydney pubs – is it my imagination that they wore satin, as befitting that glam era?

The next time I saw Lou was in 1977, the Rock and Roll Heart tour, also in Adelaide – with dark curly hair and much beefier, he must have cut down on the speed. I had taken up photography at art school and the photos above are from a blurry, spotty roll of Tri-X that I shot on my student Pentax. I remember Berlin as one of my favourite albums from these art school years, and still have my old scratched vinyl.

It was many years later that I caught up with Lou during his Ecstasy tour of 2000, in the baroque splendour of the State Theatre. By then I had moved to Sydney, travelled in Europe, and had two teenage sons. The band was amazing, including electric violin (his wife-to-be Laurie Anderson had played on the album), and it was a sublime concert, with Rock Minuet a transcendent highlight.

The final concert I saw was the great reprise of his album Berlin, that was performed at the State Theatre in early 2007, with a band comprising original personnel from the band (Steve Hunter) and some new  favourites (Sharon Jones! Antony!), as well as a Julian Schnabel set design.

On Lou’s last visit to Australia in 2010, he and Laurie curated the Vivid Festival at the Sydney Opera House. Would have loved to see him perform again, but couldn’t quite take to a live revival of Metal Machine Music, so we saw Laurie Anderson in concert instead, a sweet and perceptive story-teller, so glad I did.

As a creator with multiple aspects to my work, I love e-portfolios, and have several! This blog is my art e-portfolio, I have another site for my educational and research work, and then there’s my Creative Becoming blog, where I try to bring together my creative, professional and research interests 🙂

So this week I was at a forum on e-portfolios in education, looking at how portfolio learning can allow formal learning programs to support the lifelong and life-wide learning journey. Anyone interested in looking at the poster I presented (A learning portfolios approach to academic development), can check it out over on my Creative Becoming blog: eportfolios for academics.

Since my sister Kate died last year, I have been intermittently delving into images of her to develop a series of portraits. It’s slow going, more therapy than creativity perhaps. The first portrait I was happy with is this one, ‘Dear departed’, and it has been selected as a finalist in the Olive Cotton Award for Photographic Portraiture, opening today.

Here’s my artist statement about the image:

After losing her, it struck me how bereavement plays tricks on your mind, making you believe that you see the object of your grief everywhere around. Although I don’t believe in an ‘after-life’, I do believe that our life energy is absorbed back into the universe in the same way that our body is.

This portrait combines these ideas – an ephemeral vision of Kate emerges from, and represents the dispersal of her spirit into, the natural environment that she loved.”

Here is a link to the Olive Cotton Award for Photographic Portraiture 2013 catalogue.

It’s been pointed out that the resolution of the Momento previews are not good enough to allow reading of the text – so I have created some downloadable copies here that are more legible:

Printed copies of the portfolios can be purchased directly from Momento Shop (search for Belinda Allen). The next portfolio, Wounded Country – will be uploaded soon 🙂

Here’s the next in a set of portfolios of my photographic work produced over the last ten years. This one, Sacred sites: Exploration, has images composed from photos taken in exploring the Australian outback and bush over the last few years, combined with some song lyrics that have been inspired by my travels. Readings of the history of the settlement and exploration of Australia have influenced these works – this is further explored in my next portfolio, Wounded Country – stay tuned 🙂

All the portfolios can be purchased directly from Momento Shop (search for Belinda Allen).